Reporting in from the 2012 Holnemvolt Festival

It is customary to write reports immediately after the event. That didn’t quite happen this time, but those who were there know that it was not an easy task. You need time to process. Stories grow, do their work, and after two days of storytelling it is hard to return to the mondane. We will try anyhow.

In the first hour of the second Holnemvolt Festival (April 14-15, 2012) all storytellers introduced themselves with one short tale (it was worth getting up early). After this first hour we already knew that these two days were going to be intense, in a good way – since we all had to work through all the things we heard. 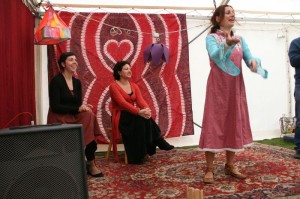 The three ladies of Paramythokores continued tales from the point where they usually end; it is often more exciting to see what happens after “happily ever after.” They told us of topics still valid in our times such as immigration, and a husband seduced in a foreign land while his wifre waits for him at home. In the story of Zeus and Europa we learned that the great god own a sizable wardrobe of animal costumes that he can choose from when he plans on pouncing on someone, and that the choice is not exactly easy… The three members of the storytelling company passed the word around, and at the most exciting parts we did not even notice when one of them stopped talking and another one picked up seamlessly. 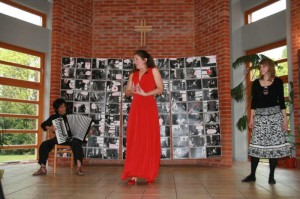 The magic continued with the performance of Paola Balbi and Robera Montisci (Raccontamiunastoria Storytelling Company). Paola is a professional actress, she even studies at the Shakespeare Academy in London. She brought to life with perfect gestures the not-so-naive nun, the hedonistic accordion player or the devil resembling security personnel. Her Sex and Tuscany was a modern adaptation of tales from the Decameron; Paola told her sexy stories in a fashionable red dress and matching high heels. Playing cards with the Devil, like many other southern Italian tales, dealt with the topic of death, all the tricks and excuses people use to avoid it, and what happens when your time finally comes (all is not lost, even in Hell, if one can play her cards right…). 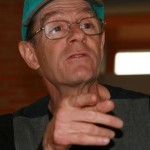 Jay Miller amazed us with surprising agility as he stood on his head in a chair, and as usual he once again drew the audience into his story (not even our main sponsor, Varró Dani could get away). Many-many stand-up comedy elements and tiny anecdotes made the performance whole; once you are under Jay’s spell, you’d better be prepared for everything between stunned silence and tears of laughter.

Andrew Wright was a surprise guest, the perfect opposite of Jay. No sudden movements, no stage frenzy; Andrew is the typical experienced storyteller who has already seen it all. We can almost picture is figure in a time thousands of years ago as he sits by a fire and greets all the trials of the world with a Buddha-like smile. 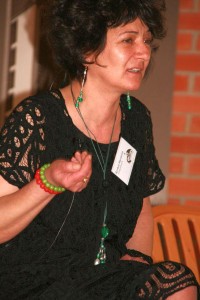 Kovács Marianna is a Croatian-Hungarian storyteller, and while her stories only arrived to us from a couple of hundred kilometers away – if stories perceive distance at all – they were still new and different. Familiar, but distinct. There were no fairy maidens and princes; instead we heard about psuffering, working, hoping people who had to find the wonder in what was given to them. 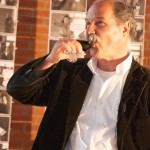 It is hard to say anything about András Berecz. You have to hear him, live him, feel him. Then for days to come you will have a phrase, an expression, a tune wandering around in your head. The storyteller “explains the world.” He even told us why it is useful for a storyteller to learn to run – obviously not everyone is happy with the stories all the time, especially if they happen to discover themselves in it…

We would like to thank all organizers, volunteers, sponsors, and, of course, our audience. To quote András Berecz: “We were jealous of ourselves.” 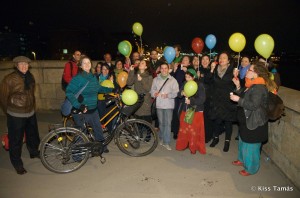