Report from the 2011 Holnemvolt Festival

Report written by one of Holnemvolt’s lead organizers, Csenge Virág Zalka. For the list of featured storytellers and their websites, click here.

It was like watching a childhood dream finally come true. 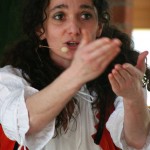 We started the festival Saturday morning with an olio, to show the audience what they can expect for the rest of the two days. To open the festival I told the story of Moses dividing the Red Sea (as an allegory to the festival, because someone had to take the first step to create a road to the other side). After that, every storyteller told a short story; they were all delightful and wonderful, and captured the audience at once. Birgit told a tale of the three wishes combined into one; Angela sang a funny song about how guys should not be trusted. Tone told the tale of the clever girl (going to the prince not dressed but not naked, not on foot but not on a horse… etc., you know the story don’t you), Wayqui told a folktale about how all the birds got married except for the hen and the rooster. Szende sang a wonderful song, and told a short little tale too.

And then it was time for the rest of the day. Every teller had a full one-hour performance; and all the programs were great! 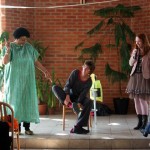 Angela opened with Swamp Party, her collection of Louisiana tales. I was the one translating for her, and let me tell you, I felt like Coyote holding on to the tail of a shooting star. The audience loved her; they laughed, they yelled, they smiled. She did not need much translation at all; she was speaking the universal language of fun. She walked down into the audience and picked a guy to participate in the story; and she not only picked him, but also picked him up, and carried him onto the stage on her shoulder. You should have seen his face.
(She also happened to pick my dad to play a loup garou in the story; I was laughing so hard I had to stop translating)

After a short lunch break, Szende took over the stage; since she doesn’t only tell stories, but also uses foot puppets, she had to sit on a table to let the audience see what she was doing. She was very cute, and pretty, and we were glad we did not need to translate her because she speaks a Transylvanian dialect and it is sometimes hard to understand even for us. Her performance of székely folktales (with lots of audience participation) was a great success. 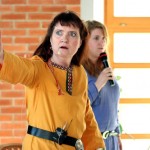 The next teller was Tone, and I was very excited to finally hear her tell her Norse tales. She was dressed in a Medieval costume, and so was her translator, Timi; they looked great together. Tone started humming a song, and we were instantly pulled into another world; I had a very strong sensation of traveling, and even the air seemed colder. We heard about the Norns, golden apples, viking warriors, Loki, and the World Tree; at some moments in the story, I felt goosebumps on my skin. She was that good. 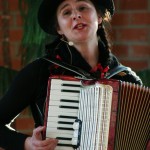 Birgit followed, and we wandered into another world: the world of Roma folktales. She fell in love with Gypsy culture a while ago, and she tells their wonderful stories and sings their beautiful songs. It was an interesting choice of a program; in Hungary, even though many Roma people live among us, most people barely know anything about their culture or heritage. Birgit did a great job opening that world up for us through stories. 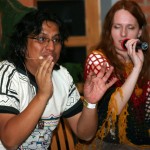 The last performance of the day was Wayqui (since I was translating for him too, I made sure I had time to rest between the two). He brought us love stories from all over the world; he told us how the first act of love was invented, he told us a tale about a grain of sand who loved a star; he told us the story of the three princes who all loved the same girl, but in different ways. Wayqui has a very calm, strong way of telling; the audience would follow him anywhere.

And the day was far from over!

In the evening, we had a ghost story concert named “Esti kísértés” (kísértés has a double meaning in Hungarian: it both means temptation and haunting). The hall filled up with people; somehow everyone seemed interested in ghost stories for adults. In this program, every teller told one tale. Some were frightening (like Angela’s, who dressed up as an old woman, concealing her face with a shawl, and managed to creep out everyone just by showing up), others were funny (like Birgit’s telling of The Piper’s Revenge). Wayqui told a Medieval tale of a man who snored, and a princess who was always terrified; it was one cute love story if I ever heard one.

And when all the tales were told, we walked outside, and… erhm… noticed some flying lanterns that happened to float by (since the fire department does not quite approve of them), and watched them disappear into the dark sky until they were just moving stars among the real ones. Our wishes, wonders and stories traveled with them.

And so ended the first day of the Holnemvolt Festival.

We woke up early in the morning, ready for the second day of Holnemvolt.

This time, Wayqui was the first performer; he brought us a full hour of Peruvian folktales that would have made most of the Folklore Department cry from pure joy. His stories were beautiful and amazing, and at the same time, funny (the legend of the son of the rainbow; the tale of the little blue stones; the journey of the three animals). I had a great time translating for him.

Birgit brought us tales about luck and happiness; she was dressed all in red, and she was an elegant Lady Luck, a teenage Cleverness, Ali the Fortunate, and many other characters all at the same time. She sang some songs too, and they all made us feel both lucky and happy.

Tone followed Birgit; she told us tales about the dangers of taking a bath. It started out funny and delightful; but as the stories went on, it touched upon some more serious issues as well (King David and Bathsheba; Susanna and the elders). It was a wonderful, wonderful program, and gave us a lot to think about.

Szende told her Székely folktales again, with laughter and dancing and puppets and jokes; the audience participated willingly, and they all had a great time. Szende has the power to be a wise woman and a cute little girl at the same time. I wonder how she does it.

Angela was the last performer of the day; she had an amazing story about Baba Yaga going to New York. She told it with momentum, and magic, and song, and it was about twice as exciting as watching an action movie. It was one part Russian folklote, one part Night Watch, and one part Fables, all mixed into a story that made my mouth hang wide open. It was unbelievable.

After the big performances, we had some time left for a SWAP! Four people from the audience volunteered to tell. One of them was Jay Miller, who is an American storyteller currently living in Budapest (who would have thought?). He told us two stories with voice and pantomime, and audience participation, and everyone loved him. My friend Júlia also told a Bulgarian folktale about the journey of the storks from Europe to Africa. I can’t hear that story enough.

Because the festival took place in a Lutheran church, Sunday afternoon was time for a service. Instead of one, we decided to tell religious and spiritual stories; I think it was one of the best parts of the festival. Wayqui, for example, told a Peruvian myth; Tone told us a tale about an elf building a church in Norway (and we could see her transform into an elf on the stage). Angela told her African folktale of finding your inner strength; we could see how the audience reacted to that, and how they all started to sing.

And with that, the festival was over. We thanked everyone who helped us; we gave our presents to the storytellers. We promised we would do it again next year.

After the closing ceremony, we all went out into the dark garden with candles in our hands; there was a small exhibition waiting for us among the trees that some of our friends put together from glass and porcelaine art, and every piece told us a different story. We wandered among the shadows with our little lights; it almost felt like finding our way back home after two days in another world.
All the tales are true.